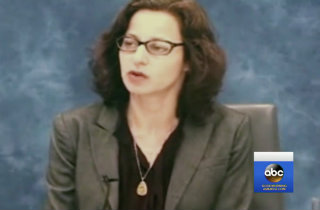 To preview Friday night’s “20/20” segment about the defamation lawsuit stemming from Rolling Stone’s article on an alleged rape at the University of Virginia, ABC News has released never before seen clips from the deposition of the reporter who wrote the piece. The footage aired during a longer preview segment earlier Friday on “Good Morning America.”

In the clips, ABC shows Sabrina Rubin Erdely, the author of “A Rape On Campus,” the since retracted article, explaining why she believed “Jackie,” the student who accused fraternity members of gang raping her. “She proved to be credible in so many different ways,” Erdely explained. “She was able to furnish me with a lot of different pieces of evidence to back up what she was saying,” the writer added.

From the transcript of Erdely’s deposition, which was filed publicly a few months ago, here’s the full context of the quotes ABC excerpted (the sections that aired on “Good Morning America” are in bold):

Q. Ms. Erdely, do you believe that Jackie was actually gang raped, knowing what you know now?

A. I have no way of knowing.

Q. Do you have any belief, whatsoever, as to whether she was or was not gang raped?

A I, I couldn’t possibly speculate.

Q. On 4313, you ask [Jackie] for the police report to verify the bottle throwing incident; is that correct?

Q. And you tell [Jackie] “Could you send it to me? Anything that’s documented, you can send to me. I’d love to see. It’s never because I don’t believe you, it’s because part of my job is double verifying everything that could be double verified. It elevates the material to the level of fact.” Did you communicate that to [Jackie]?

A. I did, that my job — that I would like to double verify everything that can be double verified.

Q. What do you mean that it elevates the material to the level of fact?

I was not concerned about double verifying everything because, first of all, not everything could be double verified. But, also, because I had total confidence in my source. And she proved to be credible in so many different ways. And I can go into great detail about that, if you wanted me to, at some point.

But I did want to — at the same time, I did want to see — and part of the reason why I developed such faith in her was because she was able to furnish me with a lot of different pieces of evidence to back up what she was saying. So, this was part of the process of getting some of that information.

The “20/20” feature also includes the first interview with plaintiff Nicole Eramo, a former University of Virginia dean named in the article as an obstacle to “Jackie” getting justice.