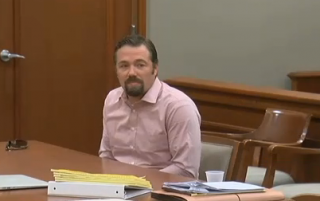 The trial of Sidney Moorer, who, along with his wife Tammy, is charged with kidnapping a Heather Elvis in December 2013 continues on Wednesday.

Earlier this week, witnesses stated that prior to her disappearance, Elvis had a black eye and was fearful of Tammy Moorer. There were also rumors that Elvis had been pregnant. On Tuesday, the court viewed surveillance video from outside a Walmart that showed Moorer entering the store at 1:12am on December 18, 2013. A receipt indicated that he purchased a pregnancy test. Elvis went missing that same day.

After court ended for the day, Moorer told WBTW that he did not get Elvis pregnant, and that he purchased the pregnancy test for his wife.

Prior to returning to court, the jury was taken to the location where Elvis’ car was discovered the day of her disappearance. Surveillance video of that location was also shown to the jury on Tuesday.