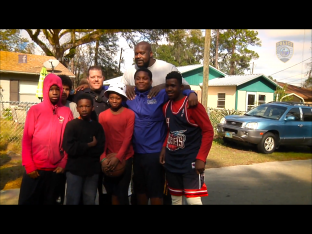 Former NBA star Shaquille O’Neal made a surprise visit to Gainesville, FL on Saturday to play in a pickup game with police officers and a group of local teenagers.

Shaq reached out to the Gainesville Police Department after viewing a video that showed GPD Officer Bobby White responding to a “noise complaint” about a group of teenagers playing basketball in the street.  Rather than shutting down the game, the officer joined in and before leaving, promised the teens he would return in a few days with additional “backup.”

The department posted the dash cam video of the incident on its Facebook page last week where it immediately went viral, with the message: “We’re going to let kids be kids,  We are going to focus on the ones that commit crimes.  #HoopsNotCrime.”

The NBA legend showed up at the station to surprise Ofc. White during roll call on Saturday and to praise the officer’s handling of the complaint.  Shaq also said he was ready serve as “backup” if they could find the teens for another pickup game.

Ofc. White, along with a few other officers, then led the way back to the teens’ neighborhood where the kids were already out in the street warming up the big rematch.  Officer White playfully taunted the teens about whether they could take his “backup” when a dark SUV rolled up and out popped The Big Aristotle.

Here is the original viral video: