‘These are ***** Gravestones!’: Veteran Charged After Clash With Pokemon Go Players (Video) 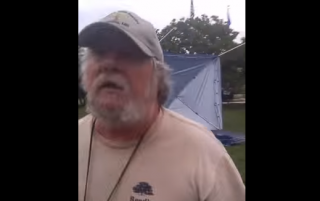 What happens when you take a bunch of young, disrespectful Pokemon Go players, and a group of U.S. veterans who wish they’d take the game out of a memorial park? Well, this, apparently. Video captured by one of the players at Veterans Memorial Park in Winona, Minnesota shows the older men getting in the face of the youngsters, with one knocking over a tent and appearing to strike the camera holder.

“These are like f****** gravestones, right there!” a man, who identified himself as Bruce Reed said. The camera holder muttered, “No it’s not,” which prompted Reed to take a swipe at him. Police eventually arrived to break up the commotion. Reed told KARE that he was charged with disorderly conduct and destruction of property.

“You think Arlington would allow this to happen? No,” Reed said. “Well it shouldn’t happen here in Winona either. I deal with PTSD, and I guess kind of the light went off in my head, I kind of snapped, I think. Let my emotions carry me. And this is what’s happened.” He’s happy he did it though. “I don’t regret it for a minute. I’m glad I did it. I’ve got support. Anyone could have done it. I just happened to be the guy to do it.”

The Winona City Council is now contemplating banning all recreational activity from Veterans Memorial Park, according to KARE. Pokemon isn’t the only reason, as people have complained about people blasting loud music in the park as well. A proposed ordinance would ban sports, athletics, picnics, games, erecting tents or hammocks except for memorial purposes, sunbathing, or playing music without authorization. The council is scheduled to vote on it Monday evening.

Have a tip we should know? [email protected]me.com