VIDEO: Muslim Woman Who Was Allegedly Harassed, Spit on Blames It on Trump 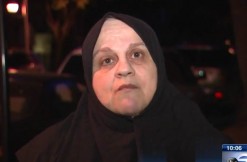 In Chicago, Illinois, a Muslim daughter and mother said a woman cursed, spit at, and harassed them. Now one of them is placing the blame on the Republican presidential hopeful

“To Donald Trump, is to leave the Muslim people in America alone,” mother Siham Zahdan told ABC 7. “Leave us alone.”

Daughter Suzanne Damra told the outlet that the perp had been bothering her for about a month, but her actions escalated on Thursday.

“F—k you, ISIS,” the woman screamed on video several times. Damra and Zahdan were in their car, and say the woman tried to open the doors and kicked the vehicle.

“That’s what you get from Donald Trump,” Zahdan said near the end of the video. “Encouraging crazy people.”

In their interview with ABC, Damra and Zahdan said a pair of nearby men not only failed to intervene, but high-fived the woman.

Police are still investigating the incident as a simple assault.

[Screengrab of Siham Zahdan via ABC 7]
–