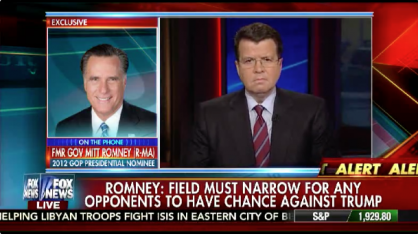 On Wednesday, former Massachusetts Governor and Republican Presidential nominee Mitt Romney indicated that there may be a “bombshell” in Donald Trump‘s taxes. The former governor, who faced intense criticism over his own taxes in his failed 2012 presidential bid against incumbent President Barack Obama, appears to be stirring the proverbial pot over Trump’s tax filings.

As the Washington Post called out the GOP for debasing itself this afternoon, Romney’s suggestion may mark the beginning of the Republican establishment’s extermination of the Trump scourge.  Now, as reports circulate that Romney may endorse Rubio, this may be the start of GOP establishment searching for a way to trumpet their derision of Trump without hurting the candidate the party has inferred they will coalesce around: Marco Rubio.

Frankly, I think we have a good reason to believe that there’s a bombshell in Donald Trump’s taxes. Well, I think there’s something there. Either he’s not anywhere near as wealthy as he says he is, or he hasn’t been paying the kind of taxes we would expect him to pay, or perhaps he hasn’t been giving money to the vets or to the disabled like he’s been telling us he’s been doing. The reason I think there’s a bombshell in there is because every time he’s asked about his taxes he dodges and delays and says well we’re working on it. Hey, we’re not talking about the taxes that are coming due this year, of course they’re working on those, they won’t be ready for months. We’re talking about taxes already filed—back taxes.

Romney’s remarks are highly speculative. While doubts swirl around Trump’s actual net worth, the billionaire himself claims it’s upwards of $10 Billion. However, Forbes has estimated it to be just $4.5 Billion, which Trump called “embarrassing” in September.

Check out the video of Romney’s appearance below:

[h/t and screengrab via Fox News via TheDailyBeast]