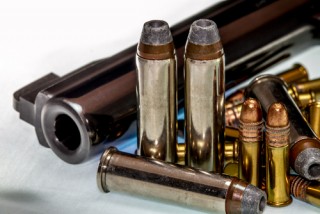 A lawsuit filed this week accuses Walmart, a gun seller, and a gun show operator of recklessly failing to stop a felon from buying guns that were used in the 2014 shooting that took place outside a Jewish center in Kansas, Reuters reports.

The claim alleges that John Reidle, who is also listed as a defendant, on different dates went to a Walmart store and a gun show in Missouri with Frazier Glenn Cross, where Reidle purchased weapons for Cross, who was a convicted felon and not legally permitted to possess guns. Cross, also known as Glenn Miller, was later convicted and sentenced to death for shootings where he killed Reat Underwood, 14, and William Corporon, 69, outside the Jewish Community Center of Greater Kansas City, and Terri LaManno, 53, outside a Jewish retirement facility. LaManno’s husband, William, filed the lawsuit.

William LaManno claims that Reidle knew Cross was a convicted felon, and that from conversations between Reidle and Cross at Walmart and the gun show, the sellers should have known that Cross was not legally permitted to have a gun, and that Cross was going to use a weapon “in a manner involving unreasonable risk of harm to others.”

In addition to the killings, Cross was convicted of three counts of attempted murder for shooting three other people who survived the attacks. During the trial, Cross said that he shot the people because he thought they were Jewish. As it turned out, none of them were.

The companies LaManno is suing, Walmart, R.K. Shows, Inc., and Friendly Firearms LLC, did not comment on the lawsuit, but Wal-Mart spokesman Randy Hargrove said, “Our condolences go out to the families who lost loved ones.”

The notion that gun sellers should be liable for shootings carried out by a separate individual has come up lately during the Presidential campaign. Democratic candidate Hillary Clinton recently criticized rival Bernie Sanders for defending gun manufacturers against the families of victims. However, Sanders did say in his interview with the New York Daily News editorial staff that people should be able to sue gun dealers or manufacturers who should have known the guns were “going into the hands of wrong people.”