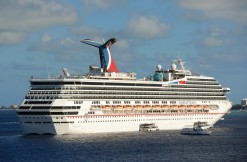 Carnival Corporation and its Fathom Cruise Line are getting sued for not letting Cuban nationals join the historic trips to the land of their birth, starting May 1. The defendants say they’re just following a Cuban law that prohibits nationals from returning by sea.

“We have requested a change in policy, which has not yet been granted, but our hope and intention is that we can travel with everybody,” a Carnival spokesperson said to the Miami Herald in a Thursday report. “We will continue to have conversations [with the Cuban government], and that’s the process we would work through.”

This isn’t a good enough excuse for plaintiffs Amparo Sanchez and Francisco Marty, who filed Tuesday in a Miami federal court with attorneys from Kozyak Tropin & Throckmorton. Their lawsuit claims the companies “adopted a policy to support Cuba’s boycott of Cuban-born individuals from traveling to and from Cuba by ship.” They cite the Civil Rights Act of 1964, saying they’re getting discriminated against in a place of accommodation, i.e. a cruise ship.

“Cuba has decided that any Cuban, even if you have a passport with a visa to go back to Cuba, they will not let you come in on a cruise line and unfortunately, the American cruise line companies have accepted it,” immigration expert and attorney Wilfredo Allen told NBC Miami.

Carnival Corporation is the first American cruise line to get the okay to sail to the island nation in decades. Nationals are still allowed to get there by air.