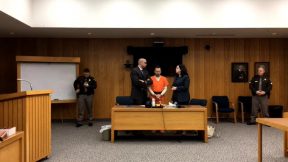 Larry Nassar, who worked at Michigan State University and at USA Gymnastics, said he molested girls with his hands at Twistars gymnastics club in Eaton County, near Lansing. A week ago, he made a separate but similar guilty plea nearby in Ingham County, the home of his campus clinic.

“Guilty, your honor,” Nassar told a judge in response to charges involving a girl under 13 and two teenagers at Twistars, where gymnasts with hip and back injuries would line up to seek his help.

Nassar, 54, has dropped his claim that he was performing legitimate treatment with his ungloved hands.

In a third case, Nassar will be sentenced in federal court on Dec. 7 for possessing child pornography. He faces decades in prison. Meanwhile, more than 100 women and girls are suing him.

“I’m so horribly sorry that this was like a match that turned into a forest fire out of control,” Nassar told a judge last week.

The owner of Twistars, John Geddert, declined to comment Wednesday. He referred to a statement last March in which he expressed “zero knowledge” of the allegations against Nassar.

The criminal cases followed reports last year in The Indianapolis Star about how USA Gymnastics mishandled complaints about sexual misconduct involving the doctor and coaches. Women and girls said the stories inspired them to step forward with detailed allegations of abuse.