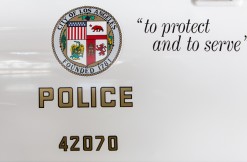 Two officers with the Los Angeles Police Department have been charged with raping four women, according to the Los Angeles County District Attorney’s Office. James Nichols, 44, and Luis Valenzuela, 43, are scheduled to be arraigned Thursday, the DA’s Office said. Prosecutors promised to push for bail at $3.83 million for Nichols and $3.76 million for Valenzuela.

Valenzuela and Nichols were partners who reportedly used their authority on the alleged victims, all of whom they arrested “at various times” for narcotics-related crimes.

“Most, but not all, of the alleged sexual assaults occurred while the officers were on duty,” the LA DA wrote in a statement. Prosecutors allege the attacks happened for over two years, from December 2008 to March 2011.

All in all, the men are charged with “multiple counts each of sexual assaults, including forcible rape, rape under color of authority, oral copulation under color of authority and oral copulation by force,” the statement read. On top of that, Valenzuela was also hit with one count of assault with a firearm (he allegedly pointed a gun at one of the women). If convicted, they face life in prison.

This is not a new story. One of the women, Tara McMahon, filed a federal lawsuit in 2014 against Nichols and Valenzuela. She also claimed that the LAPD ignored her reports about them.