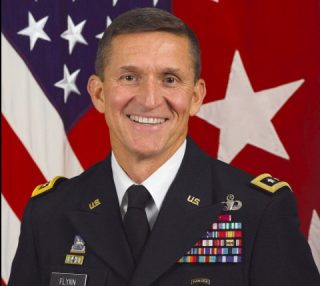 I really thought that one of the few positive things that would result from Trump’s win was our collective tacit agreement that as a society, we’re now going to pay some attention to how government officials follow security protocols. I even hoped that implicit in Trump’s yammering to “lock her up” was a promise to create at least the appearance of strict respect for and adherence to rules about the handling of sensitive information in the future.   But no such luck. In President Elect Trump’s choice of Michael Flynn as his national security advisor, we have concrete proof that the incoming administration is gearing up for four years of unprecedented irony. Now, the individual who will be chief advisor to the president on security issues will be someone who apparently installed a forbidden internet connection in his Pentagon office, allegedly gave classified information to NATO allies without authorization, and reportedly snuck out of the CIA station in Iraq when he deemed the required approval too “insane” for him to seek, according to a recent profile in The New Yorker.

Unlike Trump, Michael Flynn has had a long and relevant career to his position in the incoming administration.   Like Trump, Flynn has a brash personality, a history of disturbingly erratic behavior, and a serious problem with the concept of objective truth. The New Yorker’s Dana Priest recently penned a piece discussing her personal experiences with Mike Flynn and his colleagues. Priest’s account of talking with two dozen of Flynn’s close peers resulted in the following disturbing assessments of Flynn’s short stint as director of the Defense Intelligence Agency (“DIA”):

“They all like Flynn personally. But they described how he lurched from one priority to another and had trouble building a loyal team. ‘He made a lot of changes,’ one close observer of Flynn’s time at the D.I.A. told me. ‘Not in a strategic way—A to Z—but back and forth.’

His subordinates started a list of what they called ‘Flynn facts,’ things he would say that weren’t true, like when he asserted that three-quarters of all new cell phones were bought by Africans or, later, that Iran had killed more Americans than Al Qaeda. In private, his staff tried to dissuade him from repeating these lines.”

After leaving the DIA, Flynn’s career followed the road paved by ousted government officials who preceded him; he wrote books, gave speeches, and gave television commentary. As seems to be so often the case with the public servant-turned-media-contributor set (see, e.g., Rudy Giuliani), Flynn’s statements became more outrageous and less truthful. He calls Islam a “cancer” that is not a religion, but is rather a “political ideology,” and he made social media postings falsely asserting that Islam calls for eighty per cent of humanity enslaved or exterminated.

Is Lt.-Gen. Flynn Right that Islam is not a Religion?

Mike Flynn’s appointment as National Security Director does not require Senate conformation, so it’s happening, whether it’s a good idea or (more likely), not. The true problem with Trump’s appointments of Flynn, Bannon, DeVos, and others lies only partially with the individuals. Problematic as they are, the broader concern is that we face life under a president who clearly thinks of himself as some sort of perverse casting director. There’s a well-known formula in reality television: split the cast between crazies and non-crazies and you’ll have a winning production. Outrageous personalities sell airtime, and rational minds keep the production from spinning out of control. Successful franchises such as The Bachelor, Hell’s Kitchen, and of course, The Apprentice get the balance right, and succeed on that basis. Trump has lived in that world for quite a white, and I’m not being flip when I say that it, more than anything else, forms the basis of his presidential intentions. Campaigning is far closer to entertainment than it is to governing, and Trump’s experience served him well; but as we move on to post-production, it’s time for Trump to make some reasonable and appropriate choices. I’m hoping he does so before January sweeps week, which starts six days after the inauguration.