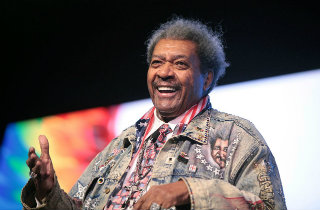 If you were the President Elect and seeking advice for who to select as Secretary of State and other positions in your cabinet, who would you go to? For Donald Trump, the answers are, perhaps unsurprisingly different from what the average person might expect. The New York Post reports that during Thanksgiving dinner at his Mar-a-Lago club in Palm Beach, Florida, asking “everybody” whether he should pick Rudy Giuliani or Mitt Romney as Secretary of State. “Everybody” included boxing promoter Don King as well as romance novel cover model turned margarine pitchman and recently minted American citizen Fabio Lanzoni.

According to the Post’s source,  “Donald was walking around asking everybody he could about who should be his secretary of state. There was a lot of criticism about Romney, and a lot of people like Rudy. There are also many people advocating for [former US ambassador to the UN] John Bolton.” In addition to King and Fabio, the guest list also included Newsmax Media CEO Christopher Ruddy, interior designer William Eubanks, political consultant Mary Ourisman, Christopher Nixon Cox (Richard Nixon’s grandson, who the Post says is in line to be named ambassador to China) and Marvel Entertainment CEO Ike Perlmutter.

This is likely to be controversial in large part due to not just the lack of political expertise of some of the guests, but also Don King’s checkered past. King killed Sam Garrett in 1966 by stomping him to death over a $600 gambling debt and was later convicted. He was pardoned 17 years later thanks in large part to support from not just the parole board, but also figures ranging from local politicians to Coretta Scott King, the widow of Martin Luther King Jr. The killing of Garrett gained significant media attention in September, when the Cleveland, Ohio city council moved to rename the street where it took place “Don King Way.”

In 1977, at a meeting of the California State Athletic Commission where he was attempting to get a promoter’s license, King testified under oath about the case. According to the official minutes of the meeting, “He said if he hadn’t been Don King of the numbers game, he didn’t think he would have gotten convicted, since investigation showed that the other man had started the fight.” While mentioned regularly in profiles of the promoter, it’s not clear why King still received a four year sentence for non-negligent manslaughter if he successfully convinced the judge he was acting in self defense.

King has also been subject to allegations that he bilked fighters out of money. In 2004, he settled a $100 million lawsuit filed by Mike Tyson for $14 million, and similar lawsuits from Muhammad Ali, Larry Holmes, Tim Witherspoon, and Terry Norris were also settled out of court. King was also subject to newfound controversy in September, when he dropped the n-word at a Trump campaign event.