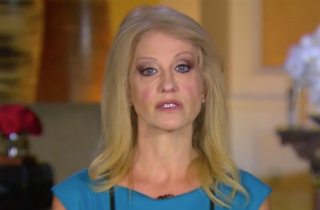 On Sunday, Kellyanne Conway, the campaign manager for President Elect Donald Trump, did the rounds on the various morning news talk shows. One of those appearances was on ABC’s “This Week with George Stephanopoulos,” where she was interviewed by co-anchor Martha Raddatz. To close the segment, the topic turned to the recount efforts initiated in Michigan, Wisconsin, and Pennsylvania after a fundraising drive by Green Party candidate Jill Stein.

Conway referred to the recount as “ridiculously fantastical,” adding that “You’ve got the president elect Donald Trump being quite magnanimous to Hillary Clinton, and you’ve got her responding with joining into this recount where Jill Stein had about 33,000 votes in Wisconsin.” Raddatz interrupted to ask why Trump is “tweeting so much about that recount,” to which Conway suggested Trump’s “30 million (combining his Twitter and Facebook) followers might not get a factual account of what’s happening otherwise.

From there, Conway unsurprisingly accused the Clinton campaign of hypocrisy in light of their demonization of Trump’s suggestion at the final debate that he wouldn’t necessarily concede on election night if he lost. “And now you’ve got Hillary Clinton, who, on election night, Martha, called Donald Trump to both congratulate him and to concede the election to him,” Conway said. “I was standing right there. Mr. Trump was on my phone with her. I didn’t hear him say ‘Well, Secretary Clinton just conceded, but she said unless of course, two and a half weeks from now, Jill Stein, who got less than 1% of the vote nationwide, decides that she should issue a recount, raise seven million buck and go have a recount in Wisconsin.”

At that point, Conway pivoted, suggesting that Stein was somehow expecting to win Wisconsin after votes are re-tabulated. “Jill Stein got 33,000 votes in Wisconsin, Mr. Trump got 1.4 million,” Conway added. “33,000 votes is like the number of people who tailgate at a [Green Bay] Packers game. It is not a serious effort to change the election results.” Stein has repeatedly said that the recounts are not an effort to sway the votes towards a particular candidate as much as to audit them in light of allegations that such an audit is necessary in the three states in question. Even if you don’t believe Stein when she says that, it strains credulity to suggest that she thinks a recount will somehow get her within striking distance of winning Wisconsin.

Conway also attempted to invoke the impact on the end of Barack Obama’s presidency in shaming those behind the recount effort. “So the question for the Democrats is why are you doing this? And by the way, what does President Obama think of this recount charade?” she asked. “He has eight weeks left to finish out his term, and I think it’s quite small of Jill Stein and Hillary Clinton’s counsel and perhaps her, to interfere with the last eight weeks of President Obama’s legacy.”