Try as They Might, WaPo Fails to Stick Another ‘Scandal’ on Steve Bannon 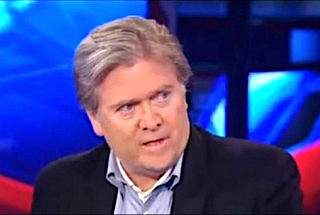 President-elect Donald Trump’s controversial pick as a top White House strategist, Steve Bannon, has sometimes seen his past come back to haunt him, especially in media circles.

Personal political persuasion has much to do with how views the seemingly endless Bannon revelations.  To his fiercest critics, Bannon is accused of being a white-nationalist, a racist, an anti-semite.  Others may not like Bannon personally, feel he is a bit to slow to denounce certain groups that some find socially unacceptable.  Finally, there are some who just look at the fact Bannon played a key role in transforming a struggling Trump campaign, turning it into a winner.

The latest story of an example of his past possibly coming back to haunt him was published in The Washington Post late Wednesday night.  According to the newspaper, Bannon accepted a number of compensation agreements in the past that are receiving new scrutiny.

For example, the report claims Bannon received about $375k in pay over four years for work at a tax-exempt Florida charity. Over the same time period, he was also allegedly serving as the chairman of Breitbart News Network.

The newspaper claims it found IRS filings that show over the same four-year time period, the “the charity paid about $1.3 million in salaries to two other journalists who said they put in 40 hours a week there while also working” at Breitbart News Network.

Throughout much of the WaPo report, it is suggested “philanthropic specialists and former IRS officials” have raised issues with the “ties between the Government Accountability Institute (GAI) [Florida non-profit] and Breitbart.”  The newspapers’ team of experts reportedly “call into question the assertions the institute made in filings to the IRS that it is an independent, nonpartisan operation.

Federal tax-exempt stats 501(c) designated charities may “not participate in, or intervene in [including the publishing or distributing of statements], any political campaign on behalf of [or in opposition to] any candidate for public office.”

Bannon’s critics interviewed by the newspaper seem to imply that his work may violate some of the federal tax laws, but it’s worth remembering the IRS tax scandal during the Obama administration and the role it plays in all of this.   Republican lawmakers made all sorts of allegations against the IRS, accusing the tax organization of targeting those who opposed President Obama’s policies.

In other words, it sounds like the IRS appears politicized to some and they are unlikely to get involved in politically sensitive issues in the near future.

In fact, the Washington Post report says as much:

The IRS has been exceedingly cautious about enforcing charity regulations relating to political activity since the 2013 disclosure that some IRS employees focused on tea party groups seeking tax-exempt status, triggering a fierce conservative backlash.

At the end of the day, the article implies a lot of questionable behavior but never comes out and accuses him of any wrongdoing.

Despite all the experts they interviewed, the closest they get to an accusation against the man of definitive illegality is to  basically say, well it’s the IRS’s fault for not having resources and for fearing additional backlash after previously  being accused by congressional lawmakers of targeting groups solely for political purposes.

In other words, it seems they want the reader to walk away with the impression that Bannon maybe did something wrong.  But the only reason we can’t say for sure is because the IRS is underfunded and too scared to do it’s job because of political pressure.

All of which leads to a perfect storm,  perfectly described by Stanford Professor Rob Reich in the article, who said, “IRS regulations are poorly written and difficult to enforce. As a consequence, ideologically driven charities across the political spectrum are taking advantage of the agency’s minimal oversight.” The article is not all that convincing.