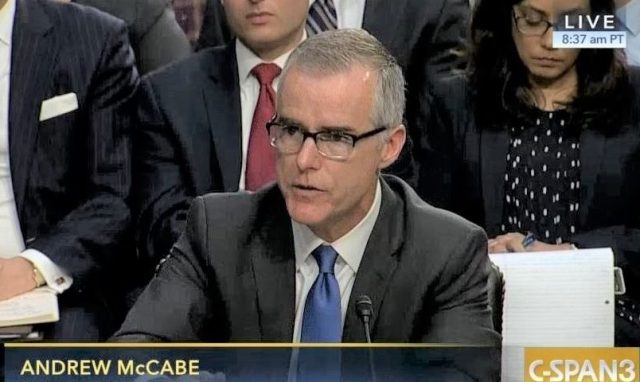 Soon after he fired FBI Director James Comey, President Donald Trump had a meeting in the Oval Office with the man who became Acting Director, Andrew McCabe. According to a Washington Post report, things got pretty personal, with Trump asking McCabe questions about his wife’s past political campaign and his own personal politics. One part of the conversation that’s caused a bit of an uproar was when Trump reportedly asked McCabe whom he voted for in the 2016 election.

For sure, it’s an odd question to ask, because 1) we vote using a secret ballot system for a reason, and 2) it didn’t matter, since the election was months prior and Trump won. McCabe reportedly answered by saying he didn’t vote for anyone, but should he have had to face the question in the first place?

The whole thing certainly comes off as uncomfortable and probably inappropriate. If any employer asks about voting habits, it could make an employee squirm, so when the employer was actually one of the candidates, that adds more than just a little pressure to the situation. Still, there’s probably nothing wrong with it, despite some claiming “Trump broke the law.”

True, employers can get into trouble by asking prospective employees about their political beliefs, but that’s not what happened here. If McCabe had been interviewing for a position at the time, and then turned down for the job, or if Trump terminated McCabe after this meeting, there would be an argument that Trump illegally discriminated based on political beliefs. While Trump hasn’t been shy about his ill will towards McCabe, he hasn’t fired him.

From the Post‘s report, the meeting comes off as similar to when Trump allegedly asked Comey for loyalty. Trump denies ever doing this, but if he had, it may have been problematic because of Comey’s role in the Russia investigation at the time. While McCabe was taking over Comey’s position, the question about voting is slightly different because it wasn’t asking McCabe to do anything. While the questions were different, the situations were similar in that Trump was trying to determine where he stood with each man, and if he could count on them.

McCabe reportedly found the meeting with Trump to be “disturbing,” but that doesn’t make it illegal. If Republicans lose control of Congress, however, that could change according to Law&Crime legal analyst Caroline Polisi.

“I predict that once democrats take back over the house, they will enact legislation delineating the proper protocol in these types of situations,” Polisi said. “It hasn’t been necessary before since executives before Trump have understood that career government officials do their jobs without fear or favor, regardless of political persuasion.” Based on current law, however, Polisi said Trump’s question wasn’t illegal, “it’s just wildly inappropriate.”

While such a direct question may be off-putting, wanting to get a sense of the leanings of high-ranking officials is not unprecedented. Attorney Ross Garber, who has represented several U.S. governors, told Law&Crime it is “not uncommon for other Presidential administrations to consider the political allegiances of senior presidentially appointed law enforcement officials.”

A source told the Post that Special Counsel Robert Mueller is looking into the conversation. That doesn’t mean there’s anything there that itself could get Trump in trouble, but if Mueller finds any stronger evidence of wrongdoing related to Trump’s treatment of McCabe or other FBI officials, the meeting could serve as additional evidence to support the case.