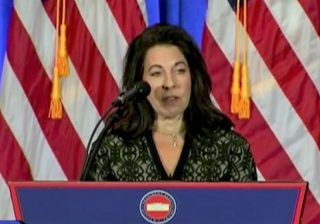 During Donald Trump‘s press conference on Wednesday, he introduced his attorney, Sheri Dillon, who spoke about how she will be helping the President-elect navigate his business and potential conflict of interest issues so that he is not a part of business operations. She backed up Trump by saying that conflict of interest laws don’t apply to the President, and that Trump is voluntarily taking these measures. Dillon has a history of working with Trump, but she may not have always supported him.

According to a LawNewz.com search, Federal Election Commission records show that Dillon has supported Hillary Clinton in the past. Records from 2007 show $1,500 in donations to Hillary Clinton for President, when Clinton was running in the primaries against Barack Obama. Dillon is listed in the form as an attorney in Washington, D.C. working for the firm McKee Nelson. Her LinkedIn profile confirms that she did work for McKee Nelson from 1999-2009, before moving on to two other firms and then Morgan Lewis. Records show she didn’t donate to any candidate this election cycle.

Dillon has an extensive background in tax law. She is a graduate of the Georgetown University Law Center and has appeared before the U.S. Tax Court, as well as district and appellate courts. According to her law firm bio, she has experience in tax audits and appeals.

A letter posted on Trump’s website indicates that Dillon and colleague William Nelson have represented Trump as tax counsel since 2005. Dillon, a partner in the D.C. office of law firm Morgan Lewis & Bokius, said in that same letter that IRS audits of Trump’s taxes from 2002 through 2008 are closed, “without assessment or payment, on a net basis, of any deficiency.” Trump has argued that he cannot divulge any of his tax returns due to ongoing audits, but this letter seems to indicate that he would be able to reveal records from those years.

Of course, donating to Clinton in 2007 doesn’t mean she supported her in 2016. Even Trump is known to have contributed to Clinton in the past. Also, Dillon’s representation of Trump now doesn’t necessarily reflect any attitude she may have towards his politics.