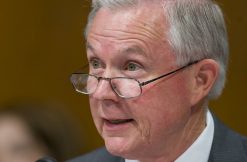 Jeff Sessions has been a U.S. Senator from Alabama since 1997, but he’s undergone renewed scrutiny after President-elect Donald Trump picked him for Attorney General. People wonder how he’ll behave in the position. So they dig, things pop up, and old stories become new again. For example, a KFILE report that he tried to stop a LGBT group from meeting on a college campus, according to a press account and legal ruling.

Back in 1996, Sessions was the Attorney General for Alabama, working under Republican Gov. Fob James. The Southeastern Lesbian, Gay, Bisexual College Conference was set to meet at the University off Alabama in February.

James told Sessions this violated a 1992 law that prohibited state schools from giving money to, or hosting any group “that fosters or promotes a life style or actions prohibited by the sodomy and sexual misconduct laws.” The group in question aimed to show how people could avoid STDs, and to foster discussion on substance abuse, and the Internet.

As KFILE puts it, Sessions was initially hesitant, reportedly saying the law was “fuzzy” in this situation, but he eventually tried to stop the group from meeting. He wrote a letter to the university president, but campus officials didn’t budge, arguing that the conference was protected by the First Amendment.

Sessions announced that he might try to get a court order to stop the conference, but that didn’t matter. A judge struck down the law days later. In his opinion, U.S. District Judge Myron Thompson called it “an open effort by the State Legislature to limit the sexuality discussion in institutions of higher learning to only one viewpoint: that of heterosexual people. This viewpoint limitation violates the first amendment.”

Attempts to get a stay on the ruling failed, and Cathy Lopez Wessel, a conference organizer, actually told CNN that attendance was bigger than expected because of Session’s actions.

“What really struck me was that this seemed clearly to be about free speech and peaceable assembly,” she said. “I feel like Jeff Sessions used the full power of his office position to deny a student group the right to have a conference.”

We’ve reached out to a Sessions spokesman for comment.

The senator’s relationship with civil rights is checkered. In 2000 and 2009, he voted against expanding hate crime legislation to include sexual orientation. He called the 2015 Supreme Court ruling legalizing same-sex marriage an “effort to secularize, by force and intimidation.” And in fact, about a week before that, he co-sponsored a bill that ostensibly protected the free speech of people who oppose same-sex marriage. Critics argued it could enable discrimination, and was actually flat-out unnecessary. His record with race has also fallen under some intense scrutiny.

[image via Rob Crandall and Shutterstock]