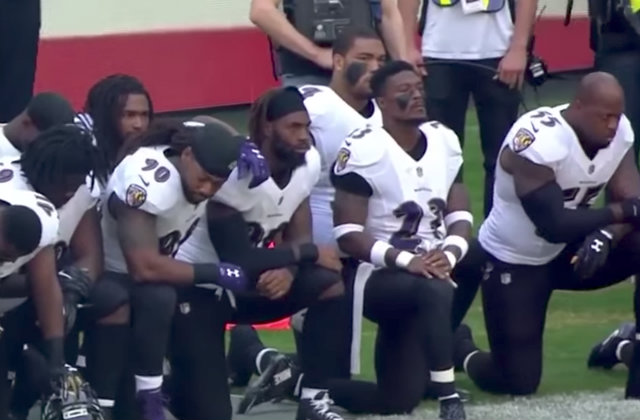 President Donald Trump said in a speech Friday that it would be nice to see owners fire any “son of a bitch” who kneels during the national anthem. Nonetheless, it seems unlikely such a thing will happen. Both New England Patriots CEO Robert Kraft and Baltimore Ravens owner Steve Bisciotti released statements on Sunday defending their players’ right to protest. Jacksonville Jaguars honcho Shahid Khan locked arms with his team ahead of their game with the Ravens.

But let’s pretend that wasn’t true. Let’s pretend an NFL team were to get rid of any player who knelt, and it could be proved in court that the player was fired because he knelt. Is it legal to fire someone for that reason? In short, yes, but it’s complicated. Professional athletes have these things called contracts. That may complicate matters.

“There is generally no free speech protection in private employment like professional sports under federal law,” attorney Mike Delikat told LawNewz. He is Global Head of Employment Law at Orrick, a firm representing major companies like Microsoft and Citigroup. “Some states, like Connecticut, may protect free speech in private employment. That said, the players union, the NFLPA, has already stated it will take vigorous legal action under the collective-bargaining agreement to protect the rights of players if they are disciplined for refusing to stand. As to whether or not the players’ contracts protects that type of speech remains to be seen and decided ultimately in arbitration.”

Indeed, the NFL Players Association on Saturday criticized the President’s speech, and defended players’ right to kneel during the anthem. It’s easy to imagine the union taking this fight to court, should any player be fired over this. They are certainly no strangers to high-profile lawsuits.

Since this is private employment, it would be a contractual matter, not a First Amendment issue. The Constitution largely stops the government from passing laws that punishes or restricts speech–this has nothing to do with private institutions like the NFL, as Delikat said.

“My simple response would be that generally speaking, NFL owners could most likely fire players for conduct in breach of their contracts,” Keith Stein, a founding partner at the boutique law firm Stein Law PLLC, told LawNewz. “NFL players certainly enjoy the protections of the First Amendment with respect to freedom of speech and expression. However, that is a ‘public’ protection. The First Amendment does not protect a player from a breach of his contract. And NFL owners are known to have fairly wide discretion in their contracts with players.”

So owners have the leverage in this situation, but how far can it go? It depends on the contract. And there’s also the matter of what the League itself might do, not just the owners. Jodi S. Balsam, Associate Professor of Clinical Law and the Director of Externship Programs at Brooklyn Law School, told LawNewz that the NFL itself can punish teams for collective actions.

“While there is no free speech protection in private employment, the NFL Commissioner has so far stayed his hand when individual players have protested the anthem, preferring to work with the players on initiatives that improve community relations,” said Balsam, who used to work for the League as Counsel for Operations and Litigation. “But when an NFL team acts collectively, with the support of management, as the Pittsburgh Steelers did by remaining in the locker room during the anthem, the Commissioner may well be justified in imposing team-level discipline, such as a fine or loss of a draft pick, for conduct detrimental to the League.”

The Pittsburgh Steelers reportedly announced Sunday that they are staying inside the locker room during the anthem.

Anyway, that’s the legal dynamic at play. It is decidedly less messy than the ongoing cultural and political fight. Some professional athletes, especially in the NFL, have taken to kneeling during the national anthem in protest of police brutality against communities of color. Critics, like Treasury Secretary Steve Mnuchin, say this disrespects military service members. Proponents, like Oakland Athletics catcher Bruce Maxwell, whose father served in the Army, insists kneeling does no such thing.

Legal questions, aside, that isn’t to say teams can’t freeze out players who’ve knelt. That’s what some say happened to former San Francisco 49ers quarterback Colin Kaepernick. He was the first player to kneel in protest of racially motivated police brutality. The practice is identified with him, no matter how many others players follow suit. So it grabbed a lot of attention when no team signed him after he opted out of his contract with the Niners in 2016.

[Screengrab via The NFL]