Trump Supporter Fined for Having Too Many Campaign Signs 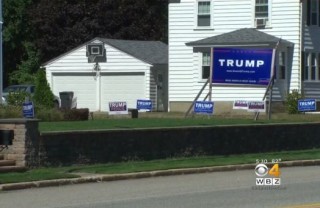 One man’s enthusiasm during this election season landed him in trouble with the law. A Massachusetts man faces fines for supposedly going too far in displaying his support for Donald Trump, but he’s not backing down. Rick Early put numerous pro-Trump signs outside his home and says that it’s his Constitutional right to express himself, according to local WBZ-TV.

City building inspector Dick Osborne said, “He’s way in excess of what’s allowed, that’s all he’s been cited for is that he’s over the signage that’s allowed by city ordinance.” City of Haverhill Code Section 255-35(c) says that temporary political signs are permitted “up to a maximum total sign area of 32 square feet for each property.” According to WBZ-TV, Early’s signs total more than 300 square feet.

“It’s free speech, maybe I’m offending the Hillary supporters, but that’s OK. They have their own property, I have my own property,” Early said. He says he will not remove the signs and is prepared to go to court if he needs to. “They’re not coming down. I think it’s my right to keep them up, and I’m gonna keep them up.”