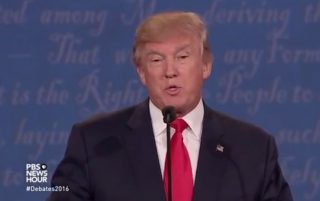 Thursday night’s third and final Presidential debate included some very pointed questions regarding the Constitution. Moderator Chris Wallace asked Donald Trump about abortion, and whether or not he wants Roe v. Wade to be overturned. The Republican candidate didn’t exactly say he wanted it to happen, but he did say that it will, given the justices whom he plans on appointing to the Supreme Court.

“That’ll happen automatically, in my opinion,” Trump said, “because I will be putting pro-life justices on the court.”