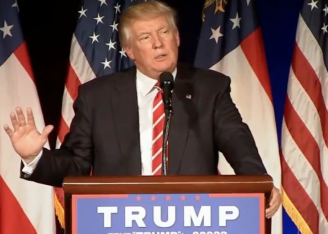 Presumed GOP presidential candidate Donald Trump told a crowd at a rally in Georgia on Wednesday that President Barack Obama is protecting Hillary Clinton from indictment over her private e-mail system.

The Hill reports Trump told the crowd gathered in Atlanta, GA that Clinton is following President Obama’s direction in her response to the Orlando terror attack so that he will continue to protect her from indictment.

“That whole thing is ridiculous whats going on there,” Trump reportedly said referring to the Clinton e-mail investigation, according to The Hill.  “How that can happen in our country today is one of the great insults to law enforcement. She’s being protected, she’s being totally protected.”

Trump also reportedly told the crowd that it will come as a surprise to him if Clinton is ultimately indicted.

“Maybe we’ll all be surprised, maybe our laws will work the way they are supposed to work, Trump said.  “But folks, I think if something was going to happen on the crimes that have been committed, I would have assumed it would have happened already.”