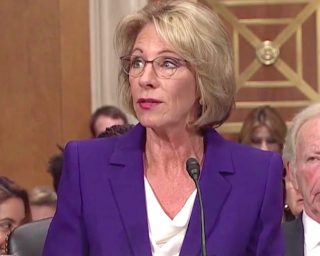 Even if you missed Betsy DeVos’ confirmation hearing yesterday, you have probably already heard the highlights. Ms. DeVos is woefully unprepared to lead the Department of Education; she is neither an expert in, nor a proponent of public education in general. She has no first-hand experience with public school or with student loans.  She also appears to know precious little about the IDEA (the federal law mandating education for all students with disabilities), and she thinks the looming grizzly bear problem is a good reason to end gun-free school zones. And if all that isn’t enough, she attended her Senate confirmation hearing without filling out her ethics forms. Still, I’d be willing to file all of that under “She’s a Novice” and argue that even given her total lack of experience, it is at least possible she’d make smart, pragmatic decisions when faced with them.

At least with respect to student loans, though, Ms. DeVos has already proven that she’s hopeless. Yesterday, when Senator Elizabeth Warren asked DeVos whether she would enforce existing federal law in order to protect students and their families from outright fraud, Betsy DeVos refused to promise that she would. Take a look at the pointed exchange, in which DeVos danced around Senator Warren’s questions, but flat out refused to commit to enforcing the existing Department of Education rules against waste, fraud, and abuse from for-profit colleges:

The “Gainful Employment Rule,” which went into effect on July 1, 2015, is a Department of Education regulation. This rule conditions the receipt of federal funds on educational institutions turning out graduates who can earn a living.

“What the gainful employment regulation does: To qualify for federal student aid, the law requires that most for-profit programs and certificate programs at private non-profit and public institutions prepare students for “gainful employment in a recognized occupation.” The regulations distinguish programs that provide affordable training that leads to well-paying jobs from programs that leave students with poor earnings prospects and high amounts of debt. They support greater accountability for colleges by requiring institutions to provide key information on program costs, whether students graduate, how much they earn, and how much debt they may accumulate…

In other words, if a school is teaching anything real, its students should be able to get a job after graduation. Otherwise, it’s not really “school.”

The Gainful Employment Rule seeks to prevent students from being swindled by fraudulent “colleges” and “universities” which encourage individuals to borrow money and  pay exorbitant tuition, only to fail to deliver an actual education. If that sounds sort of familiar, it’s because that’s exactly what Trump University allegedly did.

Trump University isn’t the only school that used shady practices to get their students to cough up big bucks for small results. The University of Phoenix and De Vry University have also been the subject of major investigations and lawsuits over deceptive practices, aggressive marketing, and dismal post-graduation employment statistics.

Until the relatively recent past, “for-profit” universities weren’t really a thing. Educational institutions were usually non-profit entities, and so long as they followed the rules set out by the DOE, students were free to use their Pell Grants and Federal Stafford Loans to finance their higher education. But as large corporations started to play professor, the need for some kind of regulation became obvious.

The U.S. Department of Education cited the following risk factors for students who enroll in for-profit education: for-profit students pay more up front, they borrow more often, and and they default on their student loans at disproportionately high rates.

Throw in predatory marketing practices and millions of dollars in easily-obtained federal student aid, and you have a recipe for fraud.

The idea of using government regulation to protect vulnerable young people from corporate fraud should be a no-brainer. The fact that this particular brand of fraud not only wastes the money of indiviudals, but also costs millions of wasted federal dollars should make it especially appealing to conservatives. Betsy DeVos herself is no stranger to the corporate world; her father in law, Richard DeVos, was the co-founder of Amway. If her PR team were doing its job, she’d have been prepped to take a strong stance against anything that even suggests corporate fraud.

What’s more, the Trump administration, more than any prior administration, should have a vested interest in taking an active hand in shutting down fraudsters masquerading as colleges. After all, Trump himself declared that he could have and would have won the Trump University lawsuit if only he’d had the time:

I settled the Trump University lawsuit for a small fraction of the potential award because as President I have to focus on our country.

Donald Trump, famous for declaring everyone and everything “losers” and “disasters,” and for flashing his Wharton degree to anyone willing to look should be the first in line to call bullshit on fake colleges swindling students out of federal aid dollars. Well, actually, he should be second. His education secretary should be first, because that’s her job.