Trump Delegate Says U.S. Leaders May Need to be Killed 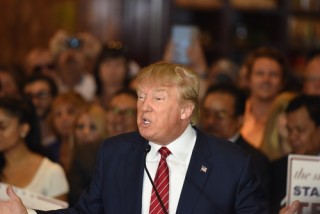 In an interview with Mother Jones published on Thursday, David Riden, a Republican delegate from Tennessee, discussed his political views, that include the need of American citizens to have sufficient arms to overthrow the government, if need be.

Riden said that every branch of the federal government is “way off away from the Constitution right now,” and that Americans have the right to “go into military battle against the government and replace those in government with individuals that will uphold the Constitution.”

And what about the individual leaders who he thinks aren’t following the Constitution? “[T]he polite word” Riden said,  “is, eliminated. The harsh word is killed. And they’re killed by American citizens with weapons.” In order to be able to do this, he said, “they need to have the weaponry necessary to be able to overthrow the federal government.”

Riden is not himself part of any militia groups, but according to Mother Jones, he is in touch with one. A retired nuclear engineer, he was part of the “Continental Congress of 2009,” where he and others put together “Articles of Freedom” that included and end to federal gun laws, using citizen militias instead of the Department of Homeland Security, and allowing for insurrection against the government, should it be deemed necessary. Riden said he mentioned his involvement on a resume he included with the application he submitted to the Trump campaign to be a delegate.

One view Riden appears to share with Trump is doubt over President Barack Obama‘s birthplace. Trump had called into question whether Obama was truly born in the U.S., and Riden said, “I am 100 percent convinced that [Obama] was not born in Hawaii.” Riden’s wife Perry is an alternate Trump delegate who seems to share his views on the President. “My wife looks at me and says, ‘Remember, he is one of them.’ Meaning he is a Muslim, he is on the side of the terrorists,” he said.

The Trump campaign did not respond to Mother Jones‘ request for comment on Riden.