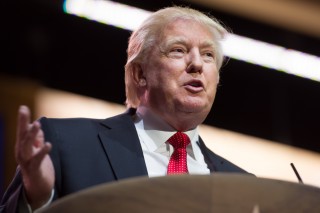 This may sound familiar, since this isn’t the first time it’s happened. Back in June, Donald Trump‘s campaign was slapped with FEC complaints for allegedly sending fundraising communications to foreign nationals from Scotland, Iceland, Australia, and other countries. Soliciting donations from foreign nationals is against FEC regulations. LawNewz.com reported at the time that the Trump campaign was hit with complaints by the Campaign Legal Center and Democracy 21, but the next day, the American Democracy Legal Fund (ADLF) filed a complaint as well.

According to allegations in a new supplemental complaint from the ADLF, the Trump campaign continued this practice, even after those complaints were filed. In their new complaint, the ADLF says that members of the parliaments of Australia and the UK still received emails asking for campaign donations as late as mid-July.

The supplementary complaint, which was filed earlier this month, says that Australian MP Terri Butler received an email from the Trump campaign on July 12 asking for a “generous contribution.” Bob Blackman and Kristy Blackman, MPs from the United Kingdom, allegedly received fundraising emails that same day. It also alleges that UK MP Peter Bottomley received an email saying, “[c]ontribute $3 now to be automatically entered to win a VIP trip to the Republican National Convention.”

The complaint claims that by sending these fundraising emails after being served with previous complaints for similar behavior, the campaign “willfully violated” federal law.

It shall be unlawful for

(1) a foreign national, directly or indirectly, to make

Sending emails soliciting contributions of donations from someone who is known to be a foreign national in connection with a federal election would violate that law.
LawNewz.com reached out to the Trump campaign for comment but has yet to receive a response.
[Image via Shutterstock]