Trump Campaign Backpedals on Mass Deportation: It’s ‘To Be Determined’ 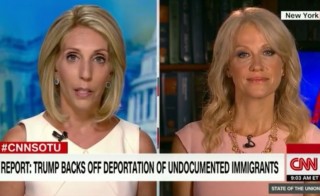 One of the hallmarks of Donald Trump‘s campaign has long been his tough stance on undocumented immigrants who came into the U.S. illegally. Besides saying that he would build a wall along the Mexican border to keep people from entering the country in the future, he said he would deport the millions of people currently in the country illegally. Now his campaign appears less definitive when it comes to that issue. In an interview on CNN’s “State of the Union” with Dana Bash, Trump campaign manager Kellyanne Conway seemed to take a softer stance than Trump has in the past.

Bash played a clip of Trump from November 2015, where he said he would have a “deportation force” that would send undocumented immigrants back to the countries they had left. Bash asked Conway if Trump still supports a deportation force to remove approximately 11 million people from the U.S. Conway dodged the question at first, saying that Trump will be laying out the specifics of his plan in the coming weeks.

When asked if that plan includes a deportation force like he had described in the past, Conway simply replied, “To be determined.”