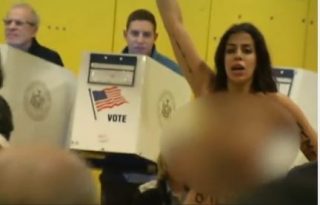 They yelled, “Out of our polls, Trump!” at the site on Manhattan’s east side, where Trump himself was expected to show up to cast his ballot.

Both women were arrested and charged with electioneering, a misdemeanor that covers various prohibited activities at polling locations.