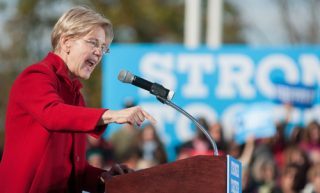 On the day before Thanksgiving, Sen. Elizabeth Warren (D-Mass.) and and Rep. Elijah Cummings (D-MD) sent a letter to the Government Accountability Office, demanding that officials review President-elect Donald Trump‘s “chaotic transition.” They question whether Trump is effectively spending taxpayer money allocated to help him with his transition.

The letter reads in part:

We are concerned about reports of “disarray”  within a “chaotic” transition, and ask that your review address several concerns, including conflicts of interest related to business holdings of Mr. Trump and his family; potential violations of protocol and security precautions related to Mr. Trump’s communications with foreign leaders; and transparency related to the use of taxpayer funds in the transition. Because the transition will last only until January 20, 201 7, we ask that you begin this review as quickly as possible.

According to the letter, GSA funding provides Trump and his team with staff compensation, office space, travel, and communication, among other services. Congress has allocated $9.5 million in overall taxpayer funds to help the president-elect. The Democratic leaders want Gene L. Dodaro, the Comptroller General for the GAO, to address questions including whether taxpayer funds are being appropriately spent and to what extent Trump’s alleged conflicts of interest affected his presidential transition.

Trump had denied that his transition is in “disarray.”

The failing @nytimes story is so totally wrong on transition. It is going so smoothly. Also, I have spoken to many foreign leaders.

During a meeting with The New York Times on Tuesday, Trump also basically shrugged off concerns about his businesses, telling reporters that “[t]he law’s totally on my side. The President can’t have conflicts of interest.”