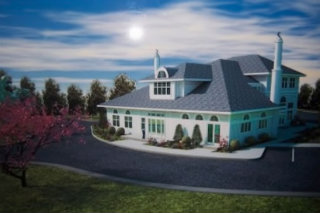 The Justice Department announced that it was filing a federal lawsuit against Bernards Township, New Jersey for its actions in denying zoning approval for a planned mosque. The Islamic Society of Basking Ridge (ISBR), which has owned the property for about five years and been working on the zoning permits for most of that time, had filed its own lawsuit back in March. The lawsuit alleges violations of the Religious Land Use and Institutionalized Persons Act of 2000 (RLUIPA) by imposing standards on the ISBR’s mosque that Bernards Township had not required of other places of worship.

“RLUIPA ensures that municipalities must treat religious land use applications like any other land use application,” said U.S. Attorney Paul Fishman of the District of New Jersey in a statement. “But here, township officials kept moving the goalposts by using ever-changing local requirements to effectively deny this religious community the same access as other faiths.”

The ISBR alleges that the visible opposition by residents of Bernards Township appeared to be primarily steeped in bigotry. “Flyers, social media, and websites denounced the mosque and were filled with anti-Muslim bigotry and references to terrorism and the 9/11 attacks,” the complaint alleges, and the issues escalated to the point of the ISBR’s office mailbox being defaced to say “ISIS.” The local Planning Board ended up holding 39 hearings in three and a half years, which the complaint says was unprecedented. The application was eventually denied on December 8, 2015, three and a half years after it was officially submitted.

Allegations of steps that the Planning Board took to make the process more difficult include:

In a statement issued last week after the DOJ made its intentions clear but before the lawsuit was filed, Bernards Township said that “The DOJ did not disclose to the Township the existence of a relationship between Plaintiff Mohammad Ali Chaudry and one of the lead DOJ investigators, Caroline Sadlowski, Chief of the Civil Division in the United States Attorneys Office for the District of New Jersey.” As for the allegations of anti-Muslim bias in the approval process, the statement included this denial:

The Township has vigorously denied this claim and has entered a defense. The Township maintains that the Planning Board denial was based on legitimate land use and safety concerns which Plaintiffs refused, and to this day, refuse to address. To that point, the Planning Board presented Plaintiffs an opportunity for reconsideration to address the land use issues early on, and Plaintiffs have shown no interest in complying.