Freddie Gray Lawyers Face Off Over Whether Officer Porter Must Testify 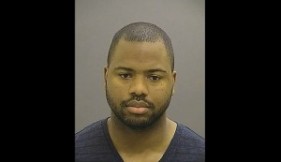 William Porter, the police officer charged with the death of Freddie Gray, has gone through a law version of Ping-Pong since his December mistrial, and it continues at a hearing this afternoon. There, lawyers will fight over a motion as to whether Porter must be a witness in the trials of five other officers who were also charged as part of Gray’s death.

This is a whole thing, but bear with me here. Porter’s previous jury deadlocked, so he still faces another trial scheduled for June. But prosecutors for the other cops want him to be a witness in their trials. And those happen soon. For example, Officer Caesar Goodson‘s trial was delayed, and Sgt. Alicia White is scheduled to begin trial Feb. 8.

The problem is, Porter’s attorneys say he simply can’t be a witness. It would violate his Fifth Amendment right not to incriminate himself since he still faces charges. Judge Barry Porter already agreed with the prosecution that Porter could get limited immunity in exchange for his testimony not being used against him in his own trial. But that’s just not enough for his defense, who insist that his Fifth Amendment rights would still be violated.

His attorneys would have their way, filing with the Court of Special Appeals to block the order that he testify for the prosecution. It’s the reason Goodson’s trial, scheduled to start last week, has been postponed.

Prosecutors don’t want their star witness out of the picture. In a filing last week, they insisted he testify in all of the other trials. LawNewz.com Editor-at-Large Beth Karas pointed out the ramifications recently: All those trials could be tied up until Porter’s constitutional limbo is resolved. The Court of Special Appeals is scheduled to hear arguments on this in March, and the struggle might stretch out for months.

Freddy Gray died after an April 12, 2015 arrest. He was placed in a police van for transport, and he allegedly sustained fatal injuries during the ride (exactly how he got hurt is disputed).

Breaking: Judge Williams denies state req to have Porter compelled to testify in 5 officers’ trials, saying it appeared to be stall tactic

Had the judge granted the state request, the trials of all the officers charged in Freddie Grays death would’ve been postponed indefinitely

Most of the trials will go on, except White’s, who needs to wait for the Court of Special Appeals to make a decision.