The Adam Matos Jury Must Consider This List Of Charges 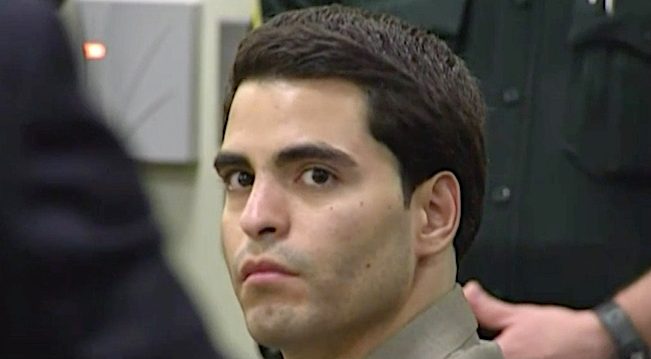 A Florida jury has begun deliberations over whether defendant Adam Matos should be convicted for killing four people and, if so, of what crime. Matos admitted to killing each of the four victims; the question now is whether he should be punished — and for how long.

The state says Matos committed first-degree murder against all four victims. The defense says the killings were either justified (Self-defense) or were crimes of passion.

The judge instructed jurors to consider the following possible charges. Jurors must start with the top charge and, if necessary, work their way down from there.

(1) FIRST-DEGREE MURDER. Under Florida law, this count requires premeditation. Prosecutors argued that the defendant formulated plans to kill all four of his victims after a domestic violence call by victim Megan Brown the morning of the murders. Brown said Matos had threatened her and that she feared for her life. (The defense said the call was exaggerated and was part of an attempt by Brown and her new boyfriend Nick Leonard to get Matos out of the picture.) Matos admitted that after injuring Leonard, he went back and beat him to death, which the prosecution said was itself an admission to premeditated murder as to Leonard.

(2) SECOND-DEGREE MURDER is where a defendant commits an “imminently dangerous” act “regardless of human life” with a “depraved mind.” Second-degree murder does not require a finding of premeditation, but it does apply where the victim and the defendant had an ongoing relationship with underlying elements of hostility.

(3) MANSLAUGHTER is killing another person “without lawful justification.” Heat of passion crimes in Florida are manslaughters. The defense argued that at least some of the killings could fit the definition of a heat of passion crime and therefore fall into this category.

(4) JUSTIFIABLE HOMICIDE. Under Florida law, the definition of justifiable homicide is convoluted. However, jurors can consider it if they believe a defendant acted “upon any sudden and sufficient provocation, or upon a sudden combat.” The defense argued that some of the killings could be excusable under this legal standard because, under the defense theory, some of the others attacked Matos first — and with deadly force. Problematic for the state is that two of the victims, Megan and Gregory Brown, were believed to have been shot and killed with a weapon Nick Leonard brought to the home where the murders occurred. It’s at least arguable that a struggle occurred between Leonard and Matos, that Matos gained the upper hand, that Matos gained control of the gun, and that Matos shot back. The defense emphasized during closings that Matos lived in the home and had a right to be there.

(5) NOT GUILTY. Obviously, the jury could go there, though even the defense seemed to suggest this was extremely unlikely.

If the jury convicts Matos on any of the first-degree murder charges with relation to the deaths of any of the defendants, the trial will move into a penalty phase. Should that occur, jurors will consider whether Matos should face the death penalty or be sentenced to prison for life.

Killed were Megan Brown, whom Matos had dated; she and Matos had a child together who was four at the time of the murders. Megan was shot in the left eye. Megan’s father and stepmother, Gregory and Margaret Brown, were also killed. Gregory was shot twice in the back. Margaret was beaten to death. The medical examiner believes she was also asphyxiated, but Matos claimed on the witness stand that he tied bags around her head only to prevent blood from spilling out of her body. Megan’s new boyfriend, Nick Leonard, was also beaten to death. The state and the defense disagree as to the order of the murders.

Matos claimed from the witness stand that he left the house after the August 28th 911 call by Megan Brown, but that he returned to the home to retrieve his property. He claimed that when he showed up, Leonard appeared out of a closet and attacked him. Leonard had brought his own gun to the home. Matos claimed Gregory Brown, who owned a number of weapons, tried to shoot him, but that the gun misfired twice. Matos also claimed that Megan Brown yelled at her father to shoot Matos. Matos said he killed all three in the ensuing commotion because he feared they would kill them. He says he killed Margaret Brown out of fear she was in on this attempt to take his life, but later realized she probably wasn’t.

Have a tip we should know? t[email protected]