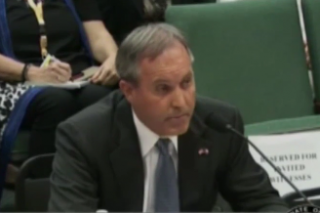 Texas Attorney General Ken Paxton was hit with civil charges of federal securities fraud on Monday, the Associated Press reports. The accusations are related to activity involving a tech start-up Paxton was allegedly involved with prior to taking office.

The Securities and Exchange Commission alleges that Paxton assisted in raising $840,000 for the company, Servergy, without telling investors the company was paying him. The SEC says that Paxton was obligated to tell potential backers that he was receiving 100,000 shares of Servergy common stock for his services.

Paxton’s attorney, Bill Mateja, stated that the Attorney General “vehemently denies” the allegations, although at the time, Mateja had not looked over the lawsuit.