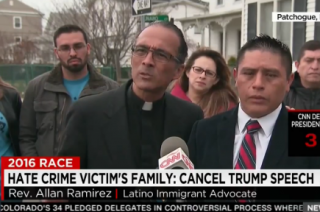 In 2008, the Long Island village of Patchogue, NY suffered the loss of Ecuadorian immigrant Marcelo Lucero, who was killed by a white teenager who stabbed him in what was considered a hate crime that targeted Lucero for being a Latino immigrant. On Thursday, Republican Presidential front-runner Donald Trump, who has come under fire for his tough stance on Latino immigration from Mexico, is scheduled to hold an event down the street from where Lucero died.

Local religious leader Rev. Allan Ramirez spoke  on Monday to express their outrage over what they feel is a distasteful turn of events. Ramirez described the anti-immigrant climate at the time of Lucero’s death, saying that young people would attack Latinos for sport, and then brag to their friends the next day about how many they got. He said that Trump encourages the very attitude that sparked those events, and says having him make an appearance so close to where Lucero was assaulted is “aking to inviting Osama bin Laden to speak at Ground Zero.”

Ramirez fears that the anti-immigrant sentiment that plagued his community will become more widespread should Trump become President. He blamed what happened to Lucero on a culture full of hate speech towards immigrants, and said, “Donald Trump wants to continue that kind of hate speech at the national level.