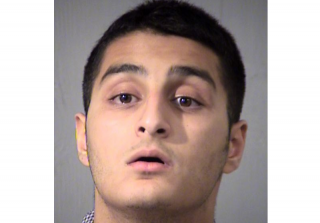 An Arizona teenager went before a federal judge Saturday morning, after the FBI arrested him for allegedly threatening to commit acts of terror against government buildings, the Associated Press reported. Mahin Khan, 18, was charged with two counts of terrorism and conspiracy to commit terrorism.

Court records are currently sealed, so further details about the case are unavailable. However, Mia Garcia, a spokeswoman for the Arizona Attorney General, said the allegations did not stem from any threats about an attack over Fourth of July weekend.

Khan is being held without bond in Maricopa County Jail.