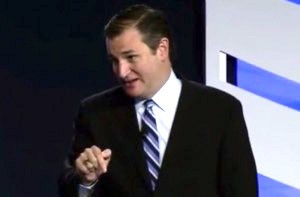 This article comes from the editorial staff of LawNewz.com, a new Abrams Media website covering law and crime.

The recent revelation that Republican Ted Cruz failed to disclose a 2012 $1 million loan from the Wall Street investment bank, Goldman Sachs, raises legitimate legal concerns, and could spell trouble for the presidential hopeful.

The New York Times first reported that campaign disclosure reports show that before a scheduled run-off in the May 2012 senatorial election, Cruz received a low-interest loan from his wife’s bank, which his campaign committee never reported to the Federal Election Commission.

The Cruz camp is brushing this all off as a BIG oversight. Cruz promised to immediately amend the filing if there were any problems. The Texas Senator said that he and his wife put their liquid net worth into the campaign and the loans in question were “disclosed over and over and over again.”

That’s great but here’s the problem: What he did could still be a violation of federal law.

“The fact that the information was out there somewhere doesn’t negate the fact that it wasn’t disclosed on the candidate’s campaign disclosure…that’s a violation of federal law,” Paul Ryan with The Campaign Legal Center told LawNewz.com. The group is nonpartisan, and goes after Republicans and Democrats alike for campaign finance violations.

To be clear, here’s the federal law that Cruz may have violated:

So the question is, what can happen next? Clearly someone will have to file an official complaint (I have no doubt that will happen). If they do, the FEC could impose fines.

The real problem for Cruz is if evidence somehow emerges that this was “knowing and willful.” If that could be demonstrated, then Cruz could potentially be prosecuted criminally by the U.S. Department of Justice, according to campaign finance experts. Cruz insists that it’s not.

“The bottom line: Any money that is obtained or received to fund a campaign needs to be reported,” Ryan said.