Supreme Court Will Decide if Gerrymandering Can Get Too Political | Law News
$promoSlice() doesn't exist!

Supreme Court Will Decide if Gerrymandering Can Get Too Political 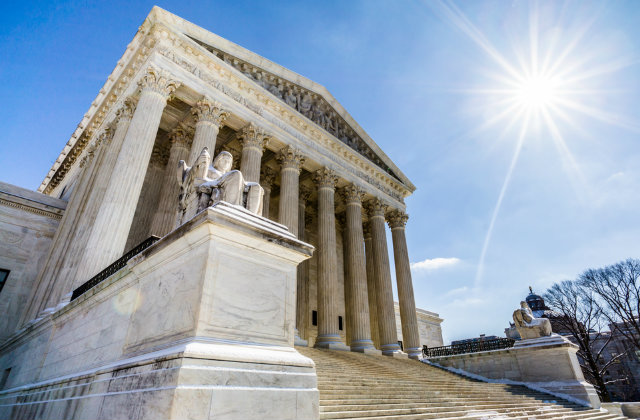 WASHINGTON (AP) — The Supreme Court is taking up a case about political maps in Wisconsin that could affect elections across the country.

The justices are hearing arguments Tuesday in a dispute between Democratic voters and Wisconsin Republicans who drew maps that have entrenched their control of the legislature in a state that is otherwise closely divided between the parties.

The Democratic challengers are asking the court to declare for the first time that the inherently political process of redistricting can be too partisan.

Republicans contend that courts have no business in decisions that should be left to the political branches of government.

Courts have struck down districts as racially biased for decades, and other partisan districting lawsuits are moving through the courts in Maryland and North Carolina.

The outcome in the Wisconsin case probably rests with Justice Anthony Kennedy. He wrote in 2004 that he had yet to be shown a good way to measure and manage excessively partisan districts.

“If workable standards do emerge to measure these burdens, however, courts should be prepared to order relief,” Kennedy wrote in a redistricting case from Pennsylvania, Vieth v. Jubilirer.

Paul Smith, the same lawyer who failed to get Kennedy’s vote and thus a majority 13 years ago, is again urging the court to rein in partisan gerrymandering, or drawing districts for partisan gain.

This time, Smith said in representing the Wisconsin voters, there are good ways to measure when one party gives itself an unfair edge in creating districts.

In Wisconsin, a lower court sifted through evidence showing that Republicans packed Democrats into some districts and spread them out across others to maximize gains for the GOP. In one analysis, Democrats captured far fewer state Assembly seats even when they won roughly the same percentage of the statewide vote as Republicans.

The lower court concluded that the districting plans were drawn to discriminate against Democrats, the Republicans’ advantage would endure even in the face of a strong Democratic showing at the polls and the plans could not be explained by other, non-partisan reasons.

The state is arguing the justices should put an end to courts’ consideration of partisanship in districting plans and cautioning that far from being manageable, a ruling for the Democratic voters would open the door to a flood of lawsuits that would be based on cherry-picked evidence and hard for judges to manage.

The court said it will not provide live audio of the highly anticipated argument, despite a request from several members of Congress to Chief Justice John Roberts.