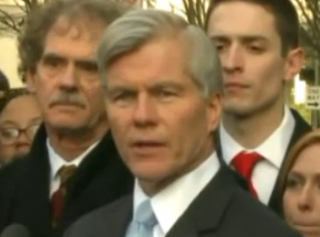 On Wednesday, the Supreme Court will hear arguments in the appeal of former Governor of Virginia Robert McDonnell’s conviction for taking improper gifts while in office. In 2014, McDonnell was found guilty of 11 counts of corruption charges including bribery, conspiracy, and extortion, for accepting $177,000 in gifts and loans from businessman Jonnie Williams, who wanted McDonnell to promote a dietary supplement made by Williams’s company, Reuters reported.

McDonnell was sentenced to two years in prison, but the Supreme Court said he would not have to serve while the appeal was still pending. During oral arguments, McDonnell’s attorneys will likely continue their argument that he did not do anything that constitutes an “official action” that the law requires for conviction. In written arguments, they claimed that McDonnell only engaged in routine interactions with Williams.

A decision in the case is expected in June.