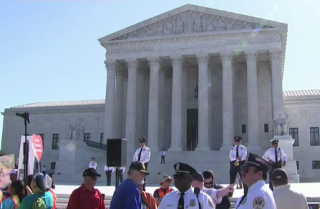 Update 4/18/2016 12:27pm: The Court spent most of the 90-minute oral argument discussing whether the states had legal standing to contest the Deferred Action for Parents of Americans and Lawful Permanent Residents (DAPA) program, but when they addressed whether the President acted within his power in creating it, they appeared to potentially be split. According to The Hill, Justice Kennedy seemed to come down against Obama, saying during the arguments, “It seems to me that’s a legislative, not an executive task.” He also said, “It’s as if the President is setting the policy and the Congress is executing it,” a process he described as “upside down.” This would indicate that Kennedy believes Obama acted out of turn in creating DAPA. For more on why a 4-4 split could doom the immigration program, read below.

On Monday, the Supreme Court will hear arguments in U.S. v. Texas, which centers on President Obama’s executive action on immigration. The case has drawn much attention, with heavy partisan politics surrounding the President’s plan. Republicans have been firmly against it, as it would give a temporary pass to many undocumented immigrants, while Democrats have been strongly in favor of the measure.

The issue is whether Obama acted within his constitutional power in issuing the Deferred Action for Parents of Americans and Lawful Permanent Residents (DAPA) program. DAPA allows undocumented immigrants in the country illegally to apply for work permits, if they have children who are citizens or legal residents, have been in the country for five years, and have not been convicted of a felony or repeated misdemeanors, according to the Washington Post. They would still not be granted legal status, but would have three years before the government would take steps to deport them. Obama passed DAPA through executive action in November 2014 as a measure to prioritize which illegal immigrants should get the administration’s focus.

Texas and 25 other states sued, arguing that the President did not have the power to put DAPA in place, and both a federal district court and the Fifth Circuit Court of Appeals agreed. Now, the U.S. government is bringing the case before the nation’s highest court, claiming that the states do not have standing to sue over an immigration program, saying that immigration policy is the responsibility of the federal government, and the Department of Homeland Security has done nothing wrong in coming up with this program. The lower courts said that the states indeed have standing, for reasons including the cost they bear in issuing new driver’s licenses to those who fall under DAPA.

It’s anybody’s guess how the Supreme Court will rule on this. Justices Kennedy and Roberts could be key for the federal government. In the past, Kennedy has leaned towards giving the federal government discretion over immigration, according to NBC News, while Roberts has ruled against states having standing to sue. The Washington Post reports that by ruling against the states on the grounds of standing, they will avoid deciding the case on the merits, avoiding a politics altogether.

Should the Court be split with a 4-4 vote, the states would win and DAPA would fall, as that is how the lower court ruled.