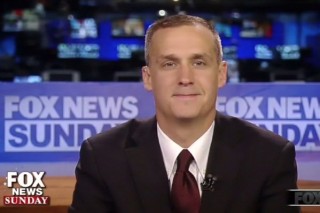 On the heels of getting through the Michelle Fields drama, Donald Trump‘s campaign manager, Corey Lewandowsi, apparently got himself into another Florida problem. The issue surrounds his appearance on Fox News Sunday this weekend. Apparently he just blatantly got some facts wrong.

Here is what he said (when trying to pivot the conversation away from the Michelle Fields controversy):

“The chairman of the party of Florida who is an avid and outward supporter of Marco Rubio, gets to appoint 30 of the delegates…Now, I understand those are the rules but Donald Trump won…And now, you’ve to a person who is supporting Marco Rubio who gets to appointing 30 of the 99 delegates.”

Politico.com‘s Marc Caputo pointed out that Lewandowski was wrong on three counts:

“[Florida Republican party chairman Blaise] Ingoglia remained neutral before and after the state’s March 16 GOP primary; the chairman doesn’t “appoint” any delegates; and the chairman is in charge of recommending 15– not “30 of the 99” — delegates to the state executive committee. “

Oops. The state GOP spokesperson didn’t hold back their frustration in a statement to Politico.

“It is unfortunate that Mr. Lewandowski went on national TV and misled viewers with inaccurate statements both on the process and substance,” Waidi Gaitan, the state GOP spokesperson said in a statement.  Apparently, Republican insiders within Trump’s campaign are pretty miffed by Lewandowki’s error-filled appearance.

Florida is a winner-take-all state, which means whoever wins the primary (Trump) wins all 99 delegates. The delegates are bound through 3 rounds of balloting.

Republican delegate expert Josh Putnam described how the delegates are picked in his blog:

Within a week of the Florida primary candidates — all of them and not just the winner — are to have submitted to the state party a list of potential delegates and alternates. It is from those lists that the delegates are chosen at a meeting of the party called by the state party chair. Congressional caucuses comprised of the state committeemen and committeewomen and county party chairs from that district elect the three congressional district delegates while the remaining at-large delegates are elected by the Executive Board of the Republican Party of Florida.