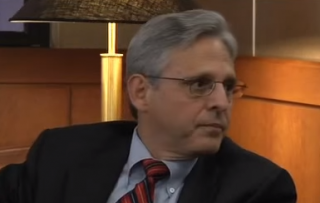 Merrick Garland, President Obama’s nominee for the Supreme Court, has quite the resume. Clerkships with high courts, partnership at a top firm, and federal prosecution are all part of the background of the man who could take the late Antonin Scalia’s place. He is an established centrist on the bench, with a tough stance on crime that could, in theory, make him palatable to a Republican Senate who has vowed not to confirm any nominee until the next President takes office. However, there is one area in particular that conservatives will scrutinize.

Garland, currently the Chief Judge of the Washington, D.C.  Court of Appeals, is viewed by some to be left-leaning on gun control. In a 2007 case, he voted to review a restrictive gun law that had previously been shot down. The law included a requirement for guns to be kept unloaded and disassembled, unless they were being kept at a place of business or were being used for legal recreational activities. Prohibiting people from having functioning guns for defense in their home was a critical issue. A U.S. District Court had ruled against the ban (and for the gun owner). The D.C. Circuit upheld that ruling, but Garland then voted, as part of a request to the court as a whole, for the D.C. Circuit to reconsider their own ruling, otherwise known as a request for en banc review. Garland lost, and the previous decision was upheld. The case, District of Columbia v. Heller, eventually went to the Supreme Court, which ruled the ban unconstitutional. While Garland’s actual decision was only to review the law and not to enforce it outright, the fact that he didn’t just agree to kill the ban may not sit well with conservatives.

Even more concerning for gun lovers is Garland’s 2000 decision in NRA v. Reno. In that case, the National Rifle Association fought against retention of background check information that is collected when people legally purchase guns. The NRA argued that the information was required to be immediately destroyed under the Brady Act. Then-Attorney General Janet Reno’s position was that it was necessary and allowed under the act to retain the data for six months in order to audit the background check system. Garland ruled in Reno’s favor, stating that her interpretation of the Brady Act was reasonable.

These two instances are hardly defining in the grand scheme of things. Voting to review a gun ban is not the same as support for it. Likewise, upholding temporary retention of background information for the purpose of making sure the system works in no way restricts a person’s right to bear arms. But when Senate Republicans are already saying they will refuse any nominee, it would be surprising if they didn’t point to these cases when they justify their decision, or lack thereof.

On the flip side, according to SCOTUSBlog, Garland has veered to the right on criminal law issues, which is not surprising for someone with his law enforcement credentials. He has ruled in favor of prosecutors when it comes to admitting evidence, and has voted against defendants, even when more conservative judges have taken the other side. A long record of being tough on crime could help sway some.

Garland also supervised a number of high-profile prosecutions, including the Unabomber and the Oklahoma City bombing. The latter went a long way in getting him appointed to the D.C. Court of Appeals by President Clinton. Garland was popular with Republicans then, and of the 32 Republicans Senators who voted in his favor in 1997, seven are still in office.

Under other circumstances, Garland would seem like an ideal candidate who could appeal to both sides of the aisle. In 2010, he was a favorite to replace Justice John Paul Stevens, the spot that ended up going to Elena Kagan. Today, however, he enters hostile territory.