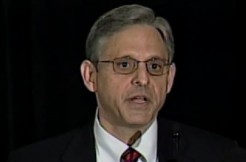 President Barack Obama is set to pick 63-year-old Merrick Brian Garland to the U.S. Supreme Court.  Garland has been a judge for the United States Court of Appeals for the District of Columbia Circuit since 1997, when he was appointed by Bill Clinton. He received his J.D. from Harvard Law School, where he has also taught antitrust law. Before becoming a judge, he was an Assistant U.S. Attorney for the District of Columbia and a prosecutor in the Criminal Division of the U.S. Department of Justice.

Stay with LawNewz.com for continuous coverage on this story.