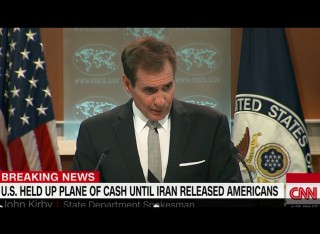 The State Department on Thursday finally admitted the $400 million cash payment to Iran was contingent on the release of detained American prisoners.

The Wall Street Journal on Thursday morning published new details about the controversial $400 million cash payment, reporting U.S. officials held the money until they had confirmation the prisoners were released.

State Department spokesman John Kirby was asked about the report today at a press briefing and he confirmed that it would be “correct” to say the U.S. government would not give the Iranians the money until the prisoners were released.

According to the Washington Times, Sen. Tom Cotton, an outspoken critic of the Iran deal, issued a statement after hearing Kirby’s remarks, saying it confirms “what many of us have suspected all along: the $400 million payment to Iran was a ransom payment for four Americans unlawfully held by the ayatollahs.”

“And we now know the extraordinary lengths to which the Obama administration went to ensure this payment happened, including lifting sanctions on Iranian Air just one day before the transfer,” Cotton added.