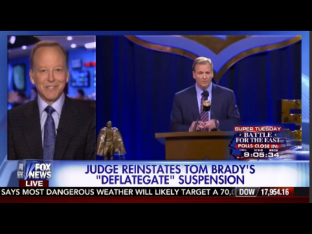 Sportscaster Jim Grey appeared on Fox News on Tuesday where he offered some strong opinions about the latest developments in the “Deflategate” matter involving New England Patriots quarterback Tom Brady.

As LawNewz.com reported on Monday, a three judge panel from the U.S. Court of Appeals for the 2nd Circuit ruled that NFL Commissioner Roger Goodell acted within his power when he issued a four-game suspension to Brady. The suspension came as a result of allegations that Brady was involved in a decision to deflate football below regulation levels before the 2015 AFC Championship Game.  As a result of 2nd Circuit’s ruling, Brady is now expected to be suspended for the first four games of the upcoming 2016 NFL season.

The latter part about Brady having to serve the suspension in the upcoming season does not sit well with Grey.  He told Fox’s Bill Hemmer that Goodell ultimately got what he wanted in this decision in that the 2nd Circuit found he acted within his authority.  With that, however, Gray said that Goodell now needs to exercise his authority as NFL Commissioner to put this matter to bed.

“Now, [the Commissioner] should be responsible and he should end this madness! This is ridiculous!  The NFL is engaging in something that is just ludicrous!  Stop it already!” Grey exclaimed.

Grey said rather than continuing to argue this matter in the courts, the NFL should sit down with Brady and try to reach some sort of an agreement.

“Perhaps the Commissioner will not continue down this path and come to some reasonable way to end this,” Grey said.  “Maybe a fine, maybe a game, who knows?  [Goodell] has all the authority and that is what the court has said.  So, you would hope he would act responsibly because four games for this is just ludicrous!”

It does not appear as though Commissioner Goodell will be taking Grey’s advice, however.  NFL.com on Tuesday posted an article recapping an interview Goodell gave to Bloomberg News earlier today.  In the interview, Goodell weighed in on the 2nd Circuit’s ruling for the first time.

“[The 2nd Circuit judges] were very firm in their decision that that was within our authority and the judgments were based on solid facts,” Goodell reportedly said.  “So we’re pleased with that and we hope we can move forward from here.”

Goodell also responded to criticism that he wields far too much power over NFL disciplinary matters.

“We think it’s important that the Commissioner protect the integrity of the game, Goodell said.  “That you can’t entrust that to somebody who has no understanding of our business and, in fact, the appellate court yesterday reaffirmed that. So, we think this is an important element of our success.”