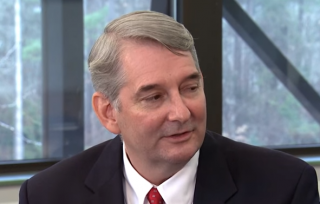 While many people protested against what’s become known as the North Carolina bathroom law, which requires schools and state buildings to designate bathrooms according to a person’s sex at birth, plenty of others are supporting it. Proponents of the law gathered at a rally on Monday, where State Senator and Republican candidate for State Attorney General Buck Newton addressed the crowd.

Newton closed his speech by telling those in attendance to go home and tell their friends and family “how hard we must fight to keep our state straight.” Yup, those were his words. Here’s video of his remarks:

Newton defended the law, saying that it protected women and children from sexual assault in bathrooms.