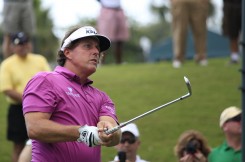 Seasoned Las Vegas Gambler William “Billy” Walters has pleaded not guilty to charges of conspiracy, securities fraud, and wire fraud in a Manhattan federal court.  The insider trading scheme he allegedly participated in made over 40 million dollars and included a tip that benefited star golfer Phil Mickelson.

Mr. Walters allegedly received the tips from Thomas Davis, who is the former chairman of the Dean Foods Company.  Mr. Davis has pleaded guilty to the charges that he faced and, under a deal with prosecutors, he will cooperate in the probe.  Mr. Walters’ arraignment came nearly two weeks after his arrest in Las Vegas. He was released on 1 million dollar bail.  However, according to Reuters, Assistant US Attorney Brooke Cucinella has urged the judge to set bail at 50 million dollars, claiming that due to his wealth and private jet, Mr. Walters is a flight risk.  Cucinella went on to say that he could use his nearly 200 million dollar net worth and one of his private jets to escape the country.  US Magistrate Judge Andrew Peck rejected the prosecution’s arguments and set the bail for Mr. Walters at 25 million dollars.

Mr. Walters is accused of gaining nearly 32 million dollars from the insider trading with the tips about Dean Food Company from Mr. Davis. Mr. Walters also allegedly gave out tips of his own recommending Dean Foods’ stock to Phil Mickelson. Mickelson has not been accused of any insider trading, but has reached a deal with the SEC to pay back over 1 million dollars that he earned as a result of the tips.

Mr. Walters’ trial is ongoing and Lawnewz will have updates when we receive them.