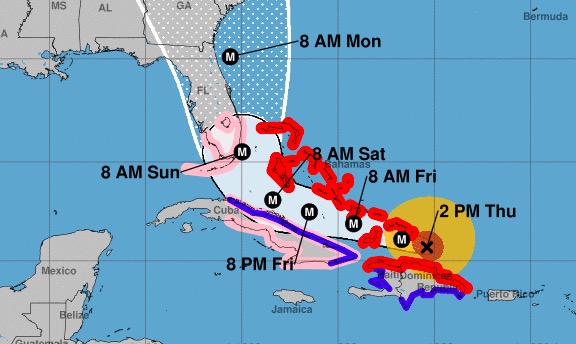 Many residents in the path of the storm are wondering if they can be fired for not showing up to work due to incoming storms and likely flooding from Hurricane Irma.

The self-styled Front Page of the Internet’s legal advice forum is heating up discussing employment-law-related ramifications from any potential work missed in the event that wage-earning employees attempt to save their own lives.

One redditor asked, “In the event of a hurricane, can I be fired for not showing up to work because I had to evacuate for a few days?”

Here’s the long answer: Most states–including Florida–have a legal regime in place known as “at-will employment.” On its face, that phrase doesn’t really confer much meaning. Most laws don’t.

And, if you attempted to guess what “at-will” means without any understanding of how laws are made in this country, you might think it was an egalitarian effort to provide some form of protection for employers and employees alike. It’s not.

Rather, the term “at-will” simply refers to an employer’s right to hire-and-fire as they please. Or, at-will.

So, again, to make a long story short: If your employer wants to fire you for missing work due to Hurricane Irma, they can do so without any real threat of suffering any sort of legal consequences. You want to save your family, pets or property? That doesn’t matter. There’s a bottom line in business and you’re just a number who can easily be replaced. If this sounds harsh, welcome to the law.

Though not expressly codified in law, Florida officials insist that ignoring mandatory evacuation orders would amount to a criminal violation. LawNewz has covered this issue in the past and determined that Florida is highly unlikely to criminally prosecute individuals who stay. So, as a sword, those criminal violations are probably pretty meaningless.

There is, however, a shielding argument for adversely affected employees here: taking the criminal nature of ignoring a mandatory evacuation order at face value, employers would find themselves essentially asking employees to do something illegal if they fired their employees who obeyed the law by leaving areas subject to such orders.

This would be a violation of Florida’s public policy–social and ethical considerations undergirding a legal system. Florida, by dint of lobbyist oversight most likely, is one of 43 states with some form of public policy exception to their at-will statute. Florida’s General Labor Regulations §448.102 reads, in relevant part:

An employer may not take any retaliatory personnel action against an employee because the employee has…Objected to, or refused to participate in, any activity, policy, or practice of the employer which is in violation of a law, rule, or regulation.

That sounds nice and pleasant, but what does it really amount to under the circumstances? Not much.

Section 448.103 of the same statute provides the form of relief an employee can receive if they’re illegally fired: they can sue their former boss in civil court. That doesn’t mean they’ll win. And it’s certainly not considered a criminal violation.

Damages possible in such a lawsuit are also fairly limited by the statute itself. Oh, and a couple other things: (1) an employee attempting to sue on this basis would had to have told their employer that what they were doing–the firing–was illegal when they did it; and (2) an employer is legally allowed to avoid liability under the statute by simply claiming any other excuse for firing the employee in the first place–probably by dint of lobbyist acuity.

And, finally, let’s be honest here: if you lost your job at an Amazon factory–and were trying to pick up the pieces of your life after a catastrophic natural disaster–then you’re probably not filing a lawsuit in the Sunshine State or anywhere else.