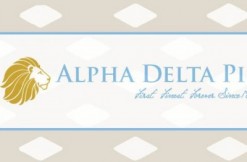 A sorority in Alabama is in trouble after they made a shirt depicting a black man snack on a watermelon. Way to rep the Southern heritage, guys.

Samford University apologized of the actions of Alpha Delta Pi on Friday, in a statement from the school’s executive director of communication, Philip Poole.

“This is completely inconsistent with the university’s mission and values,” he wrote. He also shifted all the blame onto the student group. “Despite the university’s denial of the project through our normal review and approval process, the shirts were produced anyway.”

You can see the full statement here:

An apology to the community pic.twitter.com/Cb8OgS4NKf

“We do not tolerate, and would never intentionally approve any design with racial stereotype/overtones or any other offensive image or language,” Executive Director Linda Ablard wrote in a statement published Friday. She promised to enhance the design approval process so things like this don’t happen again.

LawNewz.com have reached out to Alpha Delta Pi, and are waiting for a response.