Sore Winner? Why Congressman Issa Is Not Going to Win Libel Lawsuit Against His Opponent 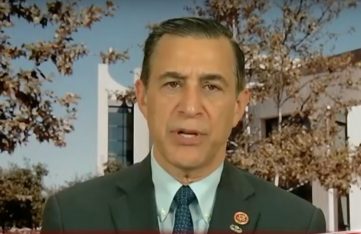 Republican Congressman Darrell Issa of California was officially declared the winner on Monday in a tough reelection battle against Democratic challenger Doug Applegate (winning by only 1,982 votes as of Wednesday).  While the election fight may be over, there may still be another battle that the two men will have to fight out in a courtroom.  Only this time it is not a recount, and it was not even brought by the challenger.  That’s right, it is a lawsuit filed by Issa — a lawsuit he is not going to win.

One day before the election, Issa filed a libel lawsuit against Applegate and members of his campaign.  The San Diego Union-Tribune newspaper obtained a copy of the lawsuit and it claims Applegate ran a pair of television ads that used out of context remarks, a “fake, doctored headline” and made other various misrepresentations about Issa’s time in Congress.

One of the ads made claims that Issa had basically used his office to enrich himself and his businesses and the second referred to some statements Issa had made about a bill that would allow 9/11 victims to sue Saudi Arabia for damages stemming from the terror attack.

The lawsuit seeks $10 million in damages (which Issa says he’ll donate to charity) because the ads exposed Issa to “hatred, contempt, ridicule and obloquy because they inaccurately portray the Congressman as deceitful, uncaring person and corrupt in his role as a member of the U.S. House of Representatives.”

There are many other examples of politicians filing slander, libel and defamation lawsuits against campaign opponents.  In fact, a nearly identical lawsuit was filed by the challenger in 2012 Missouri Governor campaign.  Dave Spence’s lawsuit charged the incumbent Gov. Jay Nixon defamed him for running election ads that charged Spence used government bailout funds to enrich himself and his bank.  However, the lawsuit was quietly dismissed a few weeks after the election that Spence lost by 12 points.

But the margin of loss was likely not the reason the lawsuit was dismissed.  Instead, Spence likely realized the burden of proof to win the case would simply be too high.

In these type of cases involving public officials, the plaintiff (Issa) would have to demonstrate the Applegate acted with “actual malice.”  In other words, he would need to prove that Applegate knew the statements were false or acted with a reckless disregard for the truth.

This standard seemingly presents a problem for Issa because the wording of these political advertisements makes it difficult to determine whether the statements are wholly untrue.  The Supreme Court had never directly ruled on the application of First Amendment protections in this exact context, but other decisions demonstrate that it is unlikely that they would be willing to curb speech about politicians.

Issa’s attorney refused to comment on whether he was still pressing forward with the case, according to the newspaper. But do not be surprised if this lawsuit is quietly dropped in the coming days.