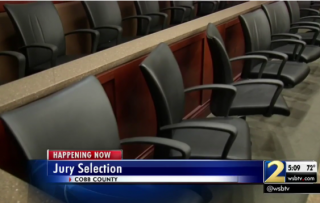 Jury selection continued Monday for the Justin Ross Harris murder trial. Attorneys questioned potential jurors for the case where Harris is charged with intentionally leaving his 22-month-old son in a hot car to die. So far today, Judge Mary Staley has approved of 31 jurors, Atlanta’s WSB-TV report.  The goal is to have at least 42 after this stage of the selection.

At least a couple of the jurors scheduled for questioning today don’t seem very interested in deciding this case. Juror 58 expressed some pretty strong opinions. The juror, whose identity is anonymous, made it very clear that he’s not on Team Harris.

He apparently just wants Harris to be punished for the crime, and doesn’t see why a trial is even necessary.

Not all of his strong opinions were even connected to the case.

Sounds like someone really wants to get kicked off the jury.

But at least Juror 58 was a good enough sport to ask questions. Juror 57 apparently couldn’t even be bothered to do that. .

JRH Trial- Week3 coverage begins. Judge is looking for Juror 57. Said she will send sheriffs if he doesn’t show up. @cbs46 #hotcardeath

With all that, it’s almost a miracle that jury selection isn’t dragging on more than it already is.

Catch the live selection process below, courtesy of WSB-TV: