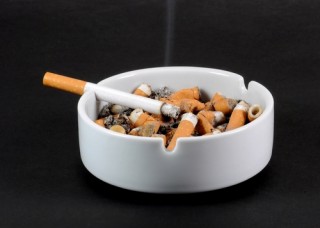 Many parents may soon have to stop smoking around their children, or risk losing custody, since more family law specialists and family law professors may soon join with nonsmokers’ rights advocates in raising the issue of smoking in custody proceedings.

At least that’s what I suggested when I recently addressed the North American Regional Conference of the International Society For Family Law to ask them to join a movement which I helped start in the 1980s to raise as an issue in child custody proceedings any unnecessary exposure of the child to tobacco smoke  – a movement which has already been very successful, but would become much stronger if these family law practitioners would join us.

I reminded them that:

* The New York Times has reported, based upon a major study in The Archives of Pediatrics and Adolescent Medicine, that “at least 6,200 children die each year in the United States because of their parents’ smoking . . “

* Second hand tobacco smoke has been clearly established to cause lung cancer and lung cancer deaths in thousand of nonsmokers each year; more than from all other regulated carcinogens.

* As with these other recognized carcinogens, there is no safe lower level – no level below which secondhand tobacco smoke does not cause cancer.  In other words, if you can smell it, it can kill you.

* Because their systems are still developing, they frequently crawl on the floor and put their hands in their mouths, have a higher lung-surface to volume ratio which results in much higher levels of carcinogens and other toxins in their bodies, and because they cannot move away from smoke as adults can, very young children are far more susceptible to tobacco smoke than adults or even older children.

* Many states have banned all smoking in many public places including bars, even though adults can easily avoid exposure to smoking in such places, but children enjoy no corresponding protection in the homes and cars they hare helpless to leave.

* When only one parent smokes in a car, even with windows open, the level of air pollution is often higher than in any bar, and over ten times higher than what the EPA rates as hazardous.

Based upon this and other evidence, my colleagues and I have been raising the tobacco smoke issue in many custody proceedings very successfully since the 1980s.  Here is a summary of the results:

* In the great majority of states, judges have issued legally binding court orders prohibiting parents from smoking if a child involved in a custody dispute is in the car or in the same house, and in some cases 24 or even 48 hours before the child arrives.  In some cases these orders are issued automatically, even if neither parent requests it.

* This new branch of family law has now generated more than 50 published judicial decisions which have created some well established law protecting children from their own parental smoking. That of course does not include hundreds if not thousands of unpublished opinions, bench decisions, various orders, etc.

* Moreover, as a result of a related movement likewise designed to protect innocent children from tobacco smoke pollution, about half the states have banned smoking in a car or in a house when a foster child is present.  The movement was triggered by a U.S. Supreme Court decision holding that exposing a prisoner to secondhand tobacco smoke could constitute “cruel and unusual punishment” in violation of the U.S. Constitution.  Since both felons and foster children are wards of the state, I argued that the innocent children should be entitled to no less protection than hardened felons.  I was also able to argue that such new rules would save tens of millions of taxpayers dollars in unnecessary medical bills, and would much easier to enforce than the growing number of smoking bans in prisons harboring dangerous violent felons,

In the overwhelming majority of cases where the issue of exposing the child to tobacco smoke pollution is raised, the parent in question agrees – as a condition of obtaining or retaining custody – not to smoke or permit smoking by others around the child.

Unfortunately, some of the publicity about my presentation focused on the unavoidable fact that in rare cases parents who refuse to agree to the issuance of such orders – or violate them – may suffer temporary or even permanent loss of custody.  Such outcomes are fortunately very rare, and usually occur only in extreme cases.

For example, an Alabama appellate court upheld removal of a child with asthma, and severe upper respiratory infection problems, only after the respondent continued to smoke around the child for more than two years after having been warned repeatedly of the danger, and the child was caused to suffer four hospitalization and twenty doctor visits “thereby directly contributing to the misery and suffering this child has had to endure.  To do this to a child is no less CHILD ABUSE than if you had deprived him of food or medical treatment.” [emphasis added]

Another appellate court used equally strong language in a similar situation, finding that agreeing to stop polluting the air the child had to breathe was too little and too late:  “The Trial Judge found that the failure of the mother and grandmother to discontinue smoking when recommended by the child’s physician was strong evidence of a lack of proper concern for the welfare of the child.  A belated cessation of smoking might evidence a desire for the custody of the child rather than concern for the welfare of the child.”

I asked members of the International Society For Family Law and their associates to help insure that all children suffering from a divorce are not required to also suffer from tobacco smoke pollution by raising the smoking issue in custody proceedings.  Since the manta of family law is to protect “the best interests of the child,” I’m confident that many will join in this effort.

Because, as lawyers, they are supposed to protect the best interests of the child, and their positions as attorneys in the family law give them power to do so, I argued that they have a moral if not a legal responsibility to raise the smoking issue in custody proceedings.

I’m confident that many more will, not only for that reason, but also because they will find this type of legal practice more rewarding and fulfilling than routine day-to-day custody disputes.

JOHN F. BANZHAF III is a Professor of Public Interest Law at George Washington University Law School. He is also the founder of the Action on Smoking and Health (ASH).