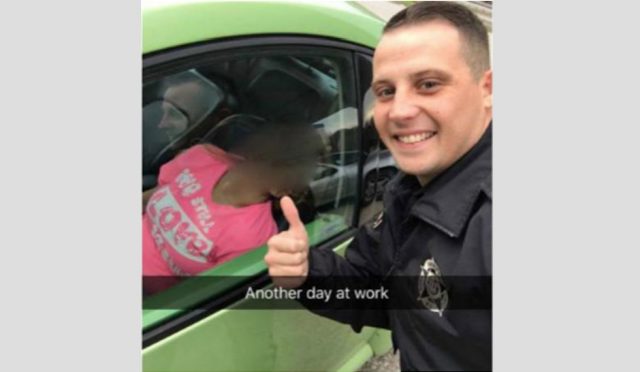 A sheriff’s deputy with the Knox County Sheriff’s Office has resigned after public pressure mounted over his alleged posting of an “insensitive” photo on social media.

Deputy John Luttrell apparently took the photo of himself giving a thumbs-up selfie in front of a woman passed out in the front seat of a car and then posted that picture to Snapchat. The photo’s caption reads, “Another day at work.”

The woman’s identity and what prompted her unconscious state is presently unknown.

Eventually, a copy of that photograph made its way to local news media, prompting no small amount of outrage and an official investigation.

According to WYMT, Knox County Sheriff Mike Smith was made aware of the photograph on November 14 and immediately started looking into the situation that same morning.

During Smith’s investigation, Luttrell allegedly copped to taking the photo and resigned.

Smith accepted Luttrell’s resignation as the investigation drew to a close.

In a statement provided to The Mountain Advocate, Smith said:

The Sheriff’s office is committed to providing professional, transparent service to the people of Knox County, and will hold all of its employees to that standard.